With children off school and the country reopening for business and sport, Offaly Sports Partnership has announced that it will be hosting three-day non-contact summer fitness camps for children aged 8 to 13 years in three locations commencing Monday, 6th July.   Camps will be held in Crinkle, Edenderry and Tullamore.

The camps will be held every Monday, Wednesday and Friday over a three-week period.  Four session lasting a maximum of 50 minutes will be delivered each day (10am for mostly third class pupils; 11.15am for mostly fourth class; 12.30pm, for mostly fifth class; and 2pm for mostly sixth class). All sessions will be non-contact with social distancing maintained at all times.  There will be a maximum of four children per one tutor.

“A lot of planning has gone into these camps”, said Eamonn Henry, Coordinator of Offaly Sports Partnership.  “We need to make sure that they are safe and enjoyable for the children that take part and that parents have confidence in the measures we put in place for this to happen”.  Mr. Henry thanked the Crinkle Sports and Recreation Centre, Tullamore Sports Link and Derry Rovers FC for giving the Sports Partnership access to their facilities for the camps.  He added that the Partnership is open to taking its camps to other locations in the County from July 27th if it is offered access to a suitable outdoor facility and dates do not clash with the camps of other sports organisations in the same locality.

Places on the camp are limited and must be pre booked by contacting the camp coordinator between the hours 9am and 5pm Monday to Friday at the following details: - 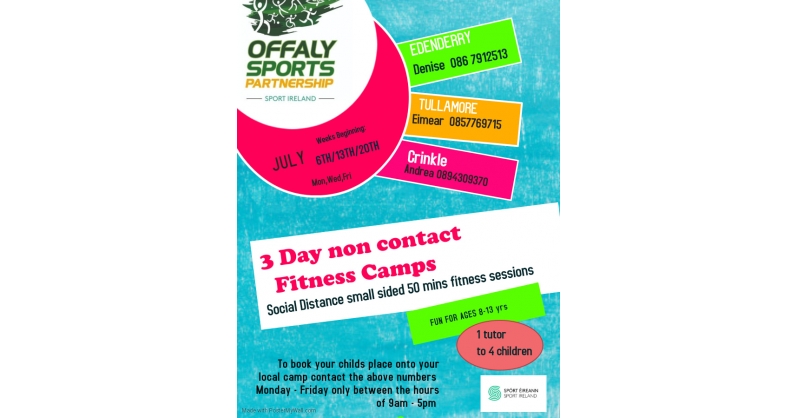